Experience the Manatees of Blue Springs State Park. Located in the Orlando area, in Orange City. Blue Springs is the winter home for the Florida manatee during the months of November through March. Blue Springs is just a short drive from Orlando. This time of year the manatees resort to the warmer waters of the springs to survive the cold waters of winter. Florida springs maintain a 72 degree water temperature year round.
Blue Springs State Park is one of the largest winter sanctuaries for this magnificent animal in Florida. Here you can view the Florida manatees in there natural habitat, with a bird’s eye view from the boardwalk that runs along the spring run, or from the St Johns River on our kayaking tour. The peace you feel when one of these magnificent animals swims up to you and places it’s head on your kayak with that face only a mother can love, is truly amazing. The temptation is incredible to reach out and pet them, however they are extremely protected, and touching them is against the law. We want to keep the manatees wild, and not have them accustomed to people, for their own safety  and away from boat motors.
Several of these manatees return to Blue Springs State Park every year. A gentlemen by the name of Wayne Hartley has been researching manatees for four decades, and he has served as principal investigator for the manatee research conducted at Blue Springs. Wayne and his associates keep track of the Blue Springs manatees, by counting  and identifying them every morning, and keep tract of their health as well as any new additions and/or calves. They have named many of manatees, and unfortunately identify several of them by their scars from boat propellers.
You can keep track of the manatee count in Blue Springs as well as donate to the fabulous work theses folks are doing by clicking here – Save the Manatee Club
We love our state parks and that is why we are proud supporters of Blue Springs State Park. You can support the park by clicking here –  Friends of Blue Springs State Park
If you would like to experience the Manatees of Blue Springs State Park, as well as abundant Florida wildlife with our Blue Springs kayaking tour, you can book online below. It’s safe, fast and easy!

Here are a few facts about our magnificent Florida manatees. The West Indian Manatee is divided into two subspecies, the Florida manatee and the Antillean or Caribbean manatee. The average Florida manatee is approximately  (8.9–11.5 ft.) long and weighs (440–1,320 lb.), with females normally larger than males. The Florida manatee can be found all over in the warm waters of Florida in the summer.  The West Indian manatee is surprisingly agile in water, and individuals have been seen doing rolls, somersaults, and even swimming upside-down. Manatees are not territorial and do not have complex predator avoidance behavior. In other words , they have no fear of anything. The common predators of marine mammals, such as orcas and large sharks, are rarely, if ever found in habitats inhabited by this species.

Manatees have sensitive tactile hairs that cover their bodies and face called vibrissae. Vibrissae are blood filled sinuses bound by a dense connective tissue capsule with sensitive nerve endings that provides haptic feedback to the manatee. In other words Vibrissae are like little antennas. Vibrissae are found on the facial regions of land critters and are called whiskers. Manatees however, have vibrissae all over their body. The vibrissae on their facial region are roughly 30 times denser than the vibrissae on the rest of their body. Their mouth consists of very mobile prehensile lips which are used for grasping food. The vibrissae on these lips are turned outward during grasping and are used in locating vegetation. The vibrissa on their bodies, not only help them find food, but also help in their navigation of turbid waters.

Manatees are herbivores, meaning they feed on mostly plants, although they do dine on some small fish and invertebrates ( little spineless creatures). There are about 60 plant species which the Florida manatee chow on,  which include sea grasses as their major food source. Because manatees feed on abrasive plants, their molars are often worn down and are continually replaced throughout their life, hence called marching molars. The Florida manatee may have up to 150 ft. of intestines, which is a lot  of intestines for an animal this size. Due to the major digesting of the course plants they eat, manatees produce massive amounts of gas, or manatee farts. Watch for the little bubbles in the water, around the tail of the manatee. lol! Manatees can eat up 10 to 15% of their body weight per day. Captive/injured manatees are fed 72 heads of lettuce and 12 bunches of kale per day. No wonder they call them sea cows!

The Florida manatee has a high casualty rate due to thermal shock from cold water temperatures. Their digestive tract shuts down if they linger too long in water temperatures below 68 degrees.  Many manatee deaths are caused by collision with motorized boats. Most people believe that the propeller of the boat is the main culprit in manatee deaths, however the brunt collision of a speeding boat is the main killer. A manatee lungs are about 4 ft. long and run down the manatees back, when the boat hits it, the lungs collapse. Manatees may also be crushed by flood gates and canal locks, also other human related items such as entangled in monofilament line, fishing nets, fishing hooks, litter, and poaching.  The state and various  private organizations around the world, have done a good job bringing  public awareness to this fact.

Although the Florida  manatee is mostly a solitary creature, they do form mating herds while the female is in estrus. Most females first breed successfully between ages of seven and nine; they are, however, capable of reproduction as early as age four. Most males reach sexually maturity by the time they are three or four. The gestation period is 12 to 14 months. As the norm, one calf is born, although on rare occasions two have been recorded. We saw a mother with two calves last year on one of our tours to Blue Springs. (see pic above) It was a rare and special treat! The young are born with molars, within the first three weeks of birth, allowing them to consume seagrass, although they will still nurse from their mother. On average, manatees that survive to adulthood will have between five and seven offspring between the ages of 20 and 26. When a calf is born, it usually weighs between 60 and 70 pounds and is between 4.0 and 4.5 feet long. The family unit consists of mother and calf, which remain together for up to two years. Many calves have been born at Blue Springs, and are simply amazing to see! Males aggregate in mating herds around a female when she is ready to mate, however they are dead beat dad’s and contribute no parental care to the calf.

Fun Fact ~  The name manatí comes from the Taíno, a pre-Columbian people of the Caribbean, meaning breast 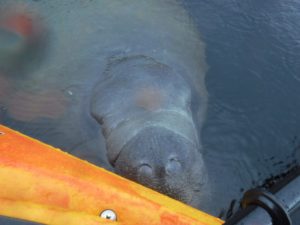 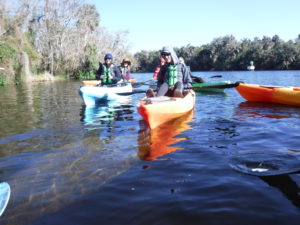